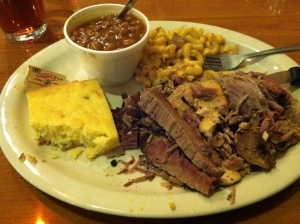 When I first knew my parents, they were about the age I am now.  They had me when they were about 40, but you really don’t register who an adult is in any thoughtful way until you get to school age, at least in my opinion.  So, when I was about six, I had a pretty good sense that my Dad was someone different than the milkman (though we had that running family joke, of course, like everyone with a milkman did).

In the few years I got to spend with him, my Dad taught me some key skills: how to fish, how to box, how to shoot a gun.  He also taught me to appreciate barbecue–the real stuff, the good stuff from Kansas City, Missouri, where he was born and raised. 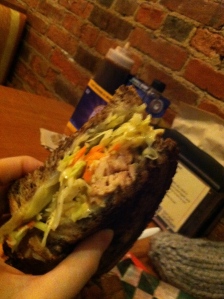 So, it was a happy and nostalgic venture indeed that Chris and I made last week to Briquettes on Bridge Street in Ashtabula.  The place has a strong reputation in the region, and it turns out to be very well-deserved.  My Dad would have approved.

Chris had the turkey reuben, which she defined as the greatest turkey sandwich she’d ever had in her life.  When she even praised the coleslaw, I knew we were in happy land. (The fact that she also talked about the ratio of slaw to bird shows she’s probably been hanging out with me a lot.)  I had the three meat platter–pork, chicken, and beef–which comes with two sides in addition to the cornbread it comes with by default: a good smokey mac and cheese and a sweet bowl of beans.  The pork was by far the best–juicy, smokey, endlessly alluring. I would eat some for breakfast, if I had any.

The beer list at Briquettes is also impressive with well over 100 bottled or canned craft beers and many on tap too.  That they have a running Wednesday night special of $1 off all Great Lakes Brewing beer brings a smile to my regionally-biased mug.

The setting of Briquettes is true Bridge Street, with brick walls, and a curved glass turret, a long wood bar, and classy metal beer signs galore.  The neon is tasteful, if that’s possible.  http://www.briquettessmokehouse.com

But at my age, you can only have so much barbecue, at least if you pay attention to things like cholesterol and triglycerides, which my cardiologist does, and which she wants me too.  I guess I can try to eat more herring and oatmeal and mackerel and pretend that I am in a Dickens novel.   Beer and wine are supposedly bad for triglycerides too, and that’s just sad for a middle aged man who has a very European take on imbibing.

Exercise is also supposed to help with those invisible enemies in my arteries.  So, this morning I got up early and did some yoga and the Scientific 7-Minute workout, which is about as much time as I could hold out before I needed some coffee.  And post-workout, my ankle that I twisted last week, and which had been feeling better, is now a bit wonky.  But my triglycerides feel great.  Or not great.  Whichever is better.

And at these times I think of my Dad, who lived a life much unlike he ever planned to once brain tumors started to rule his every moment.  He lost his sight and his marriage and his job, eventually his life.  But I know he still went out for barbecue right up until the end, back in his old hometown of Kansas City and parts nearby.  Maybe he is still teaching me now, many years since he taught me how to lead with a left jab, leave the right amount of worm dangling from a hook, and to keep the right things in my sights.

Life and times on our small farm in Saybrook, Ohio.