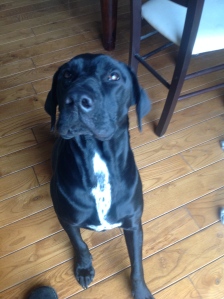 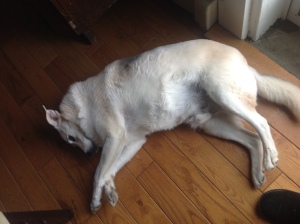 Ah, Stouty and Sammy, they make quite the pair, these two.  They are innocent posers for sure.  Yes, we also have Tasha, but T-dog goes her own way most of the time.  The two boys, they work as a team.

Yesterday out on our field hike, Sammy was on a roll.  First, he woke up a field mouse in the deep leaves.  In true cartoon-like fashion, the mouse popped up on its hind legs and chirruped at Sammy, who bobbed his head up and down above the little grey guy.  Instinct-wise, he likely wanted to chomp that little guy, but Sammy is a bit of a Buddhist and thinks a lot, truly, so he left the mouse alone and moved on.

Meanwhile Stout was busy racing through the woods looking for another dead squirrel.  See, he found one the other day–unfortunately for Chris it was on a hike that she joined–and he could not have been prouder.  The regal retriever in him did not want to drop that saggy squirrel the first time I told him to, or the next eight times either.  Hopefully some other critter in the night took care of that soggy squirrel sack of bones.

Anyway, as Stout raced in the big woods, Sammy and I, with T-dog trailing somewhere behind, walked along the thicket in our pasture.  Suddenly Sammy was excited and I then spied the ring neck pheasant rooster he found.  The prancing bird and Sammy did the classic fast forward chase around the little trees–some Benny Hill music would have been appropriate.  Soon, Stout showed up and the pace got really fast, but that pheasant had no interest in doing anything other than scampering.  That was until Stout turned on the jets and started his eight foot leaps–then the bird used flight to escape to the feathery grasses by the barn foundation.  He caught his breath for a couple of minutes until Stout found him again and then he squawked and flew into the woods across the street, having had enough of dog business.

And Friday, in a more domestic moment in dogdom, Stout pulled off something that we are not quite sure what to make of.  Chris will sometimes close the door in the kitchen that leads to the hallway that goes back to her studio.  I guess she finds dog slobber on her leg and the “hey, watcha doin’ now” stare with the constant following to be distracting from things like etching and routing and maintaining her sanity.

Anyway, the dogs usually eat about 4:30p or so.  At about 4:40p, Stout slowly slinked his way into her studio and was like, “hey, uh, just checking to see if, uh, you might want to make us dinner.”  (He is, indeed, all teenage boy.)  So, somehow, he opened the door in the kitchen without an opposable thumb.  If the door had not been closed all the way, he would have been down there bugging her hours before.  So, yeah. We’ll see where this little saga goes…

Life and times on our small farm in Saybrook, Ohio.